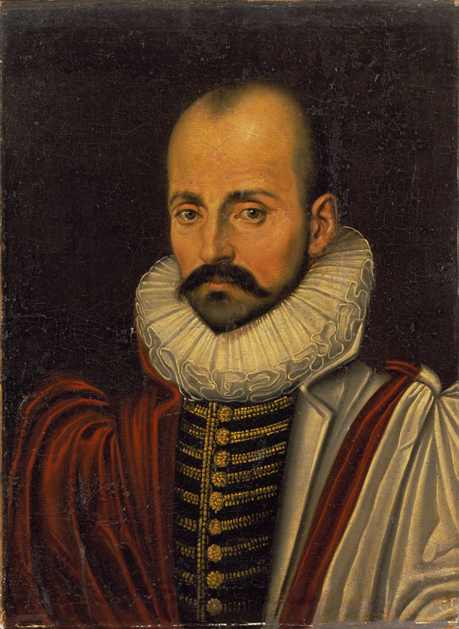 I will never finish reading Montaigne. Coming to the end of his Collected Essays today, having ‘begun’ them over two years ago, at the start of this blog, is simply another event in a life-long relation of reading and re-reading him initiated nearly a decade ago. Our life’s most inspiring thinkers whoever they be can have this effect, so long as they are read, reflected on, and conversed with, slowly, carefully and with pleasure.

Do you want to know the essence of Montaigne, a late-16th century French essayist, soldier, mayor of Bordeaux, lover of melons and horses, brought up only to speak Latin, his life shaped by civil war, plague, love and lust, children born and died, Seneca, Socrates, Plutarch and, above all, his reflections on these ? Then I have no summary. But hear this:

“If doctors want to know how to cure syphilis it is right that they should first catch it themselves! I would truly trust the one who did; for the others pilot us like a man who remains seated at his table, painting seas, reefs and harbours and, in absolute safety, pushing a model boat over them.” [Montaigne, On Experience].

I laugh when I read this in his final essay, near the end of his life’s journeys and reflections on these. Montaigne’s expertise above all is experience, his – there are no painted reefs or toy boats. Pleasure and pain have given him the clap.

Enjoying and understanding life as a good though uncertain, deceptive thing, are his expertise. Montaigne writes plainly and open-humouredly on all matters, his subject matter from the outset being the only thing he could ever claim to know, his self. He anticipates so much now modern in his thoughts on male and female sexualities and desire; he uses descriptions and stories from the New World, China and elsewhere to through a critical glare on European society and its hypocrisies which seems compellingly global. Yet few points ever come unaccompanied by a Latin quotation derived from Horace, Seneca, Cicero or elsewhere, or else some anecdote about Scipio, Cato, Socrates or Caesar.

Montaigne’s essays have provided better sustenance to my life I think than any course of schooling taken, very good though some of it’s been. I have read every word of the essays, much of it 2 or 3 times, yet I remember little. It has only taught me of myself, a subject as vain, inconsistent, idiotic, insightful and, above all, utterly essential for living. What else do we clearly or distinctly know? What else do we so dedicatedly mess up so well? By all means apply philosophical analysis to geometry or jurisprudence, but first use philosophy to live, for the benefit of your life, with all the certainty that any lessons will probably be forgotten or overruled by contrary practice. Like any life’s few compelling books which we read and read again*, it has taken place with repeated thrusts of awe and scepticism, but under the more fundamental and circular revelation of one’s own complete ignorance of a subject (or all subjects) for which one once felt some speck of surety.

When the beliefs of the powerful few are applied to the disempowered many, some think that is theirs and vainly call it common sense. I’m sceptical of it, gladly! Common sense confers greater esteem to work experience than study, and celebrates its use-value, something I’ve found invalid when looking at my life and years wasted in boring jobs or mismanaged organisations. Compare months spent in agonising concentration under some fool tyrant’s will on one unmemorable project or another: I can think of dozens of these. What good would come of offering up, as a CV does, the barren fruits of wage drudgery? It was essential then; it is useless now. Often abbreviated phrases meaningless to you are those which once denied sleep, I’m sure you have your own – GSRs, ONS stats, INWL monitoring,  Local Services – they feel like picking away at an old scar in order to embellish its gore – but they were years spent stressed, disgruntled, lazy. There’s no end to it I know, I’ll be back in that place soon.

But I prefer to think about the stoicism of Thomas Browne, of the escapades of the Angry Brigade or the exhortation to live, think, of Wilde, Woolf, Buddha, Confucius, Montaigne, and above that a million different conversations in pubs. It’s all there, known and forgotten, in loops ranging into infinity. Everyone can claim equal expertise and responsibility to the most interesting subject of ethics, themselves.

One thought on “I will never finish reading Montaigne”