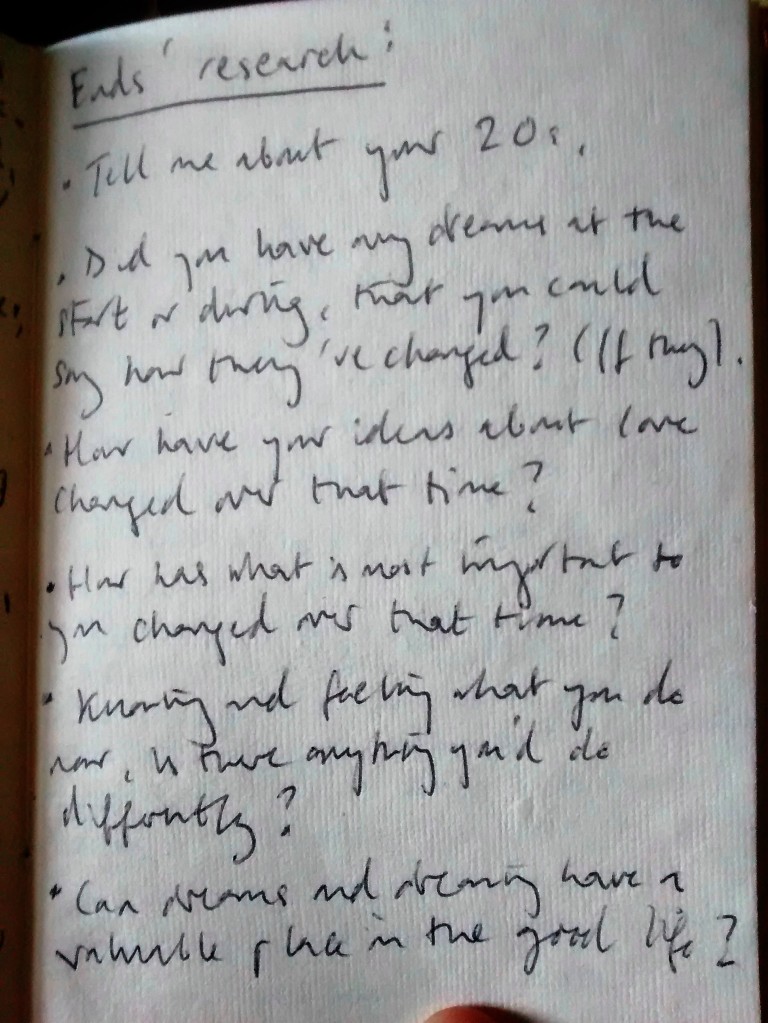 I’ve recently begun asking friends and family variants of these questions, as part of a new project. Everything in conversation, face to face, to avoid the problems of ego-projection or self-restraint that can sometimes debilitate written correspondence. The answers have so far varied from the inspirational to the disappointed.

I begun asking myself these questions a little while ago. I wondered what a life that prioritised love and generosity above all other things would amount to. A more intense form of commitment, one that is general and at best indiscriminate. One that involves an assertive line of questioning, and a sensitive ear, in seeking to determine what makes a life resilient, capable of change. One that would necessitate difficult decisions, gambling everything for something uncertain and, to some, a non-existent dreamland.

Some seismic things have also shifted in my life recently, necessitating going through old papers and books to get rid of as much as I can. Among old essays and scrapbooks, I found a curious piece of writing which seems to answer some of my questions. It was written on a sheet of A4 in October 2007 when I was 20, and I have no memory of ever thinking (let alone writing) its contents. Its discovery suggests something else of its title. It reminds me of a line from the Isa Upanishad that has been a heartening discovery. ‘Who sees all beings in his own self and his own self in all beings, loses all fear.’

Looking into the mirror – the image, Narcissus, my image. Sometimes you can look at the image and the reflection is not the same as that character called ‘me myself’ with his/her (most properly androgynous) interior dialogues streaming inside our heads. This is getting ‘lost inside our heads’, perhaps the most accurate description for what we usually call our migraines, depressions, blanks, fugues…

A million different yous. There is, it’s true. A million different persons we could’ve been, and could be. It’s an observation that’s probably been made before, with the revolutionary potential of such a bold – and constant, as constant as living and breathing can be – project of personal self-fashioning, or continual becoming. ‘Man is condemned to be free’, Sartre says, and elsewhere, ‘Man simply is’. But these bloodily-earnt facts are not convincing enough to us, those of us who live their lives and their thoughts in complete non-rationality, spontaneity and impulse, or habit and repetition – both the same. We can’t finish, let alone begin, the project of creating happy brand new lives. One is never free to make a choice if one is unaware of its possibility, or conditioned not to ask.

We’re stuck at home, happily; we go around, and complain about our shit jobs or how shit life is when you’re skint on the dole, contentedly; we come to our confidantes for advice about the latest heartache caused by a negligent boyfriend or an insensitive girlfriend, and – of course – we disregard their warnings with satisfaction. We even have late night conversations with old friends, in candlelit intimacy, hands running through greasy hair, whispering our secret woes, drug dependencies, thoughts of self-murder, lovelorn desire, unloveableness. Then, with their hands and their consolations, live lives of brief normalcy before falling into a reassuringly familiar despair that gives up all possibilities and calls it age. In its obliteration, the self is brought to the fore.

But these are just notes of a number of things. I like the way that when we’re young, our dissatisfaction takes its peak, boils over, and we fly the nest not to return, except when we’re accepted as mothers and fathers, with bouncing grandchildren. We fly the nest precisely because happiness is where home no longer is: we want to go out, make exciting friends, get laid, find lovers, adorn ourselves in ways individual and shocking but retrospectively are not. Later we find our friendships to not be the permanent loves our ciderdrunk 16 y old selves declared, in those staring at clouds conversations, but transitory, sometimes forgotten, sometimes betrayed, rarely reaching a comfortable and open proximity. And then we see how the persons that always did truly know us, and our million selves cascading from out us like sparks from a catherine wheel, were the folks at home – mum, dad, brothers, sisters. Or even a neglected spouse who, though maybe resented or even disliked, might remain the sole person one could emotionally and sexually connect with, in a total way. At least I think so – no I don’t. A large amount of marriages might lack that sexual co-awareness. The clitoris and multiple orgasms are still apparently only recent discoveries for heterosexual masculinity.

But is this even true? No – it may be true – but do I actually believe that shit? A million ones? The flipside of a collective agape is an attention seeking or denying despair that bla bla bla sod it…!

Have I even lived? Or just thought ? ‘Don’t be afraid of death so much as an inadequate life’ writes Brecht. Maybe I did a deal with the devil: school success, done without any thought or desire about why. Not a life itself, just a stringalong in order for old family to keep the love and reassurance coming (so the feeling goes). Where’s been the independence? I am not interested at all by history – I write, maybe that is what I am good at. I don’t want to be a historian or academic, and to be fair there’s not much chance I’d be good enough for it.

An ending: ‘A million different yous. He slugged the can back.’

No, another: ‘Enforced silence. He sat quiet while they babbled away. The company was too intelligent for him. He stared at the floor, glancing occasionally upwards when someone walked past him.’

One more try: ‘Scene at Greenwich Park. Place where things might happen, but never do. Her: “It never goes away.” Him: looking down at a text message. “What?” Her: “Nothing.”’

One thought on “A million different yous”